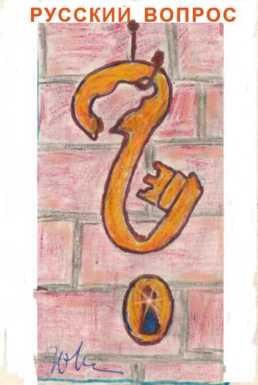 Once upon a time there lived an old joiner Giuseppe. His friend Carlo once visited him and saw a small log near the fireplace.

"What do you need it for?" Giuseppe asked, puffing away a pipe. In your closet even the hearth is false (it was painted on the canvas hanging on the wall)."

"I will make a man of him. He will be my helper and hair. Recently I had a dream: a wooden boy named Buratino[1] told me, 'Here you have a gold key. You will open the door behind the hearth, and happiness is waiting for you there'"

"You'd better drunk less," Giuseppe muttered, how can it be: a man made of a log and happiness? Are you the Almighty?"

"I have a manual about what a homo sapiens should be. It contains all laws and commandments there. And I have a bag of technical literature. I trained to be a rocketeer. If I drunk less.

Carlo put a cracked bottle behind the canvas where the hearth was painted and got to work. First he looked through the manual about creation of man then made an outline. Then he shaped a model: eyes, ears, a nose and a mouth on their right places and for certain purposes. He fixed all kinds of externals and internals: a brain for thinking, a heart for pumping blood through vessels and a liver for clearing the body of chemical waste. He needed 100 thousand miles of capillaries only, not to speak of different intestines, tendons, bones, skin and hair covering. He was tired because this work was much harder than driving nails.

The kid was made wonderfully and exactly according to the drawing. Carlo tested him by devices: the system seemed to function. His eyes could see, his ears could hear, his mouth could chew, smile and even deliver a speech if needed. Everything was screwed on their right places and flew into its right places. Carlo decided to test his work in practice. For a start he commanded the eyes of the kid to survey the vicinity and find a place for his future family life. But they winked to the mouth and ordered him to inform the father that it would cost him not less than 200 bucks. And the mouth bargained two more greenbacks for transmitting the message.

"Have you become saucy, boys," Carlo was taken aback, "your body is your house; it's you who will live in it, so you must settle down. Your hands will brick, your feet will carry cans with paint from one storey to another and climb on stepladders; your internals will cook cream of wheat and digest it; your lungs will provide all your collective with fresh air. Your brain will take responsibility for general management; your nerves for communications. Everyone should do his own work after his heart and calling.

Carlo prophesied and enlightened but only bank bills jumped out of the narrow cash dispenser's mouth. "The scoundrel has quickly got the idea," Carlo thought, "it writes numbers so accurately as if it were born a cash dispenser". The eyes billed for surveying vicinities, the hands billed for bricking and the feet for walking up and downstairs and also for cream of wheat and fresh air. The brain billed for general management and nerves for communication lines. And, of course, the cash dispenser itself billed for intermediaries.

"Have you ever seen anything like that?" How can ears charge money from eyes and liver from seats?" Carlo cried. "You are one body and a single organism, damn it. You work and serve for each other, i.e. for yourself, for the SINGLE WHOLE! What is it written in the manual? If every part of a living system, being in their right places, performs its duties honestly for the sake of everybody, an organism get the highest coefficient of life efficiency, and this is called 'bliss for everybody'.

"We know your 'for everybody," Mouth began to scream, meanwhile not forgetting to spit out bills: every word per a cent and every gram of saliva per half a cent, "these are priests and communists who invented that 'bliss' in order to deceive people. 'One for all, all for one!' One eats sprats but another eats sturgeons and drinks cognacs!"

Carlo vainly persuaded that this manual was not a communistic one but God's; it was about love for one's neighbour as oneself, i.e. about the most moral and perfect formula of life determined from above. Nevertheless, all the creatures insolently demanded to implement monetary economics with a right to individual voting. It brought about an outrageous scandal because every organ counted itself to be the most precious and indispensible and fixed the highest salary for itself. Or else they threatened to impose hard sanctions, i.e. to blind, deafen, strangle, paralyse, starve and make a fool. Tendons threatened to tie up the disobedient, so that they couldn't breathe and a skeleton threatened to inflict a full default ruining everything completely.

"We need king," summed up Appendix, "let him judge". Belly was elected king because it was the most respectable and gentle and an accumulator of values. Belly thanked for confidence to him and immediately became to swallow up a soup, a pot of wheat cream with raspberry jam and chicken's wings like a vacuum cleaner. He swallowed and swallowed till he turned into a paunch. Then Paunch belched, declared an indefinite leave and snored for a few hours. Only some bootlickers and minions from time to time managed to wake up his majesty and beg for king's favour - a crust of bread or a bone.

The hungry Appendix choked with one of those bones and became to gasp and squeak that he needed an emergent transfusion of fresh and hot blood, or else he would fester, suffocate and die. Nobody reacted to his cry; 'what a big deal, a useless atavism and potential infection in the organism makes waves. Let him die; it's not a problem. Who needs this hole-ridden bag! The fewer the better.'

Carlo vainly persuaded that according to the manual there were no useless parts in an organism and that even the smallest cell in case of need had a right to rely on immediate and selfless help from everybody or else everybody might be lost. "Get away with your trickery," Mouth spitted a general order; and Carlo got a bill in dollars for violation of somebody's rights.

However by midnight his son suddenly got a fever, became to excessively swell, turned red, white and blue, shining with all colors of the rainbow. He began to howl and scream in a nasty voice, whirled on his place, waved her arms like a propeller and at last burst.

Everything around was gushed with something unknown - gas or chicken with raspberry or something else. Carlo began to sob because it was his own child, his own flesh and blood though he was a good-for-nothing one. However, he didn't cry for a long time because it stunk very much. He swept all the rubbish into the bin and carried it to the rubbish heap. After washing and sleeping he took a sip from a bottle and again went to Giuseppe to tell him that the log had been bad and defective.

"I have no other logs for you," Giuseppe said, puffing away his pipe, screwed up his eyes in Stalin's manner. To get it to shape, it must be gouged, rough-hewed and chipped. And you have made a mess. Why have you tried to make a man and your heir of a log? You should be thankful that it cracked of greed. What if it would have hit you on the head in order to privatize your closet? You need a key and happiness. What is happiness? Answer me!"

Carlo thought and understood that he didn't know it. Feeling shy to ask angry Giuseppe about it, he went away. Giuseppe soon died on the ground of ill-health. Doctors said he had smoked too much. So Carlo lived out his days near the false hearth painted on the canvas. At cold nights when he took sips out of his bottle he still dreamt about his son Buratino, not a market-like but a human one, 'got to shape' as the wise joiner Giuseppe used to say.
Buratino sadly stretched out a gold key to his father and kept silence.


[1]Buratino is an image of a rich man in Russian, similar to 'fat cat' in English. This image was taken from the name of the central character of the fairy-tale 'The Gold Key or the Adventures of Buratino' by the Russian writer Aleksey Tolstoy.